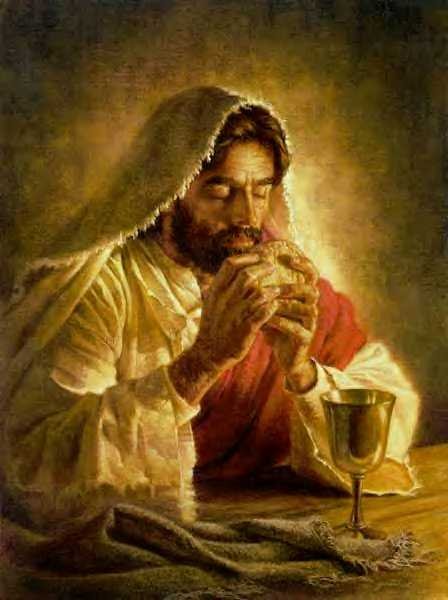 The Word of God

Read the following and then complete the task!

22 On the next day the people who remained on the other side of the sea saw that there had been only one boat there, and that Jesus had not entered the boat with his disciples, but that his disciples had gone away alone. 23 However, boats from Tibe′ri-as came near the place where they ate the bread after the Lord had given thanks. 24 So when the people saw that Jesus was not there, nor his disciples, they themselves got into the boats and went to Caper′na-um, seeking Jesus.

25 When they found him on the other side of the sea, they said to him, “Rabbi, when did you come here?” 26 Jesus answered them, “Truly, truly, I say to you, you seek me, not because you saw signs, but because you ate your fill of the loaves. 27 Do not labor for the food which perishes, but for the food which endures to eternal life, which the Son of man will give to you; for on him has God the Father set his seal.” 28 Then they said to him, “What must we do, to be doing the works of God?” 29 Jesus answered them, “This is the work of God, that you believe in him whom he has sent.” 30 So they said to him, “Then what sign do you do, that we may see, and believe you? What work do you perform? 31 Our fathers ate the manna in the wilderness; as it is written, ‘He gave them bread from heaven to eat.’” 32 Jesus then said to them, “Truly, truly, I say to you, it was not Moses who gave you the bread from heaven; my Father gives you the true bread from heaven. 33 For the bread of God is that which comes down from heaven, and gives life to the world.” 34 They said to him, “Lord, give us this bread always.”

35 Jesus said to them, “I am the bread of life; he who comes to me shall not hunger, and he who believes in me shall never thirst. 36 But I said to you that you have seen me and yet do not believe. 37 All that the Father gives me will come to me; and him who comes to me I will not cast out. 38 For I have come down from heaven, not to do my own will, but the will of him who sent me; 39 and this is the will of him who sent me, that I should lose nothing of all that he has given me, but raise it up at the last day. 40 For this is the will of my Father, that every one who sees the Son and believes in him should have eternal life; and I will raise him up at the last day.”

41 The Jews then murmured at him, because he said, “I am the bread which came down from heaven.” 42 They said, “Is not this Jesus, the son of Joseph, whose father and mother we know? How does he now say, ‘I have come down from heaven’?” 43 Jesus answered them, “Do not murmur among yourselves. 44 No one can come to me unless the Father who sent me draws him; and I will raise him up at the last day. 45 It is written in the prophets, ‘And they shall all be taught by God.’ Every one who has heard and learned from the Father comes to me. 46 Not that any one has seen the Father except him who is from God; he has seen the Father. 47 Truly, truly, I say to you, he who believes has eternal life. 48 I am the bread of life. 49 Your fathers ate the manna in the wilderness, and they died. 50 This is the bread which comes down from heaven, that a man may eat of it and not die. 51 I am the living bread[a] which came down from heaven; if any one eats of this bread, he will live for ever; and the bread which I shall give for the life of the world is my flesh.”

52 The Jews then disputed among themselves, saying, “How can this man give us his flesh to eat?”[b] 53 So Jesus said to them, “Truly, truly, I say to you, unless you eat the flesh of the Son of man and drink his blood, you have no life in you; 54 he who eats my flesh and drinks my blood has eternal life, and I will raise him up at the last day. 55 For my flesh is food indeed, and my blood is drink indeed. 56 He who eats my flesh and drinks my blood abides in me, and I in him. 57 As the living Father sent me, and I live because of the Father, so he who eats me will live because of me. 58 This is the bread which came down from heaven, not such as the fathers ate and died; he who eats this bread will live for ever.” 59 This he said in the synagogue, as he taught at Caper′na-um.

The Words of Eternal Life

60 Many of his disciples, when they heard it, said, “This is a hard saying; who can listen to it?” 61 But Jesus, knowing in himself that his disciples murmured at it, said to them, “Do you take offense at this? 62 Then what if you were to see the Son of man ascending where he was before?[c] 63 It is the spirit that gives life, the flesh is of no avail; the words that I have spoken to you are spirit and life. 64 But there are some of you that do not believe.” For Jesus knew from the first who those were that did not believe, and who it was that should betray him. 65 And he said, “This is why I told you that no one can come to me unless it is granted him by the Father.”

66 After this many of his disciples drew back and no longer went about with him. 67 Jesus said to the twelve, “Will you also go away?” 68 Simon Peter answered him, “Lord, to whom shall we go? You have the words of eternal life; 69 and we have believed, and have come to know, that you are the Holy One of God.”

I Pray (Go to a quiet place and say this prayer)

“I am the bread which gives LIFE!”

Your words are too great for me,

they are so mysterious!

But I believe you can do all things!

I believe in your words,

I trust in you.

What you say, you always do.

Give me the bread of your word!

Give me the bread of your body!

I hunger for you, Jesus!

‘To whom shall we go?

You have the words of eternal life!”

Jesus, I love you,

I want to live with your life,

Listen to ‘Breathe’ by Michael W. Smith.  Listen to the lyrics and think about Jesus saying the words. It’s a beautiful song!